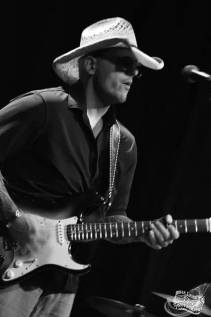 After hearing Lee’s debut Cd “570-BLUES” Bruce Iglauer of the world renowned label Alligator Records said… ” It is better than 95% of the self produced cd’s I receive each year.”

In the blues world, you know you’re onto something good when it’s praised by Alligator Records founder Bruce Iglauer. When Lee Delray sent his 2013 debut, “570-BLUES,” to the record label, the response was overwhelming:  “It’s better than 95 percent of the self-produced CDs I receive each year,” Iglauer told the guitarist and singer.
Now, with his second album, “Brand New Man,” Delray brings a fresh approach to the blues while keeping its roots firm and distinct. He had many musical influences while growing up in New York City, and this release  shows them all, from hints of country, soul, doo-wop, rock and funk to traditional blues. Delray even melds blues and hip-hop on the track “First String Man,” where, with the help of award-winning producer/engineer Andrew Chervak, he enlists the talents of rapper Young Chizz and Deejay Nogood.
Delray has been touring since 1998, building an impressive fan base in  the U.S. and abroad. With a trio that features New Jersey native John Meola on bass and Ken Conklin on drums, Delray has played venues such as  New Jersey’s Stanhope House and Stone Pony, B.B. King’s in New York City and Antone’s in Austin. He and his band have supported acclaimed artists such as Johnny Winter, James Cotton, Joe Louis Walker, Samantha Fish, Sean Carney, Sean Chambers, Eric Sardinas, and Indigenous.  A two-time regional International Blues Challenge winner, Delray represented the Lehigh Valley Blues Network at the IBC in Memphis, Tenn., in 2014 and will represent the Second Story Blues Alliance in 2017.
Delray’s approach to the genre is not cookie-cutter. It’s almost crossover, but there’s no missing him the influence of the three kings. “There will always be blues purists,” he says. “I’m a purist, but only to a point. The blues has to evolve in order to survive. I want younger generations to groove on the blues like they did back when Muddy Waters and Howlin’ Wolf were doing it.”

Past Festivals and Venues