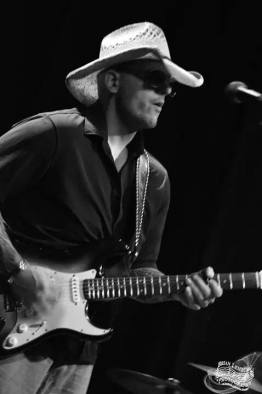 Born in South Florida and raised in N.Y.C., Lee’s earliest influence to be a musician was when his dad took him to see a Pete Seeger Concert on a pier on Staten Island. Shortly thereafter Delray saw Elvis Presley for the first time. It was a broadcast of his “69 Comeback” that changed his life forever. Lee was 11 years old when he found an old nylon string guitar in the garage. He convinced his dad to get him a few lessons and after they were done he took it on his own from there. Delray played with just about any band that would let him all through the eighties. Ranging from Oldies to Country and even Punk and Heavy Metal. In late ’89 he met Duke Lee. Duke gave him a Muddy Waters record and told him, “This is where all that stuff you listen to came from.” Early on, Lee was highly influenced by Muddy Waters, Alvin Lee, Jimi Hendrix, Bo Diddley, Chuck Berry, and especially Buddy Holly. His later influences included Albert King, BB King, Freddie King, Albert Collins, Luther Allison and the list goes on. In 1999, Lee started touring regionally. He released his first record “570-BLUES” in 2013, which was very well received by radio DJs across the country and also internationally. Delray has since established himself as a solid addition to the Blues Rock genre, receiving EXCELLENT reviews in some of the most respected publications in the business from across the globe, such as Blues Blast and renowned German Blues magazine Wasser Prawda. Lee also has been mentioned in Big City Blues Magazine as an up and coming “STAR” of the “NEW” Bluesmen. In 2014 The Lee Delray Band competed in and won the Lehigh Valley Blues Networks IBC competition and traveled to Memphis Tenn. to compete in the International Blues Competition. Delray has since been on the road with his band both regionally and nationally, playing club dates and festivals throughout NY, NJ, PA, VA, MD, TX, TN and many more. In 2013, Delray had the honor of headlining alongside Blues Rock legend Johnny Winter. He also served as supporting act for “Superharp” James Cotton. Since 2013 Delray has also done multiple festivals with the incomparable Samantha Fish. Not long after meeting for the first time at the Centenary College Blues Bash festival, Lee and Samantha got into what could only be described as a ferocious guitar jam that had to be seen to be believed! Lee has played with, opened for, or shared the bill with such artists as … Indigenous, Phil Guy, The Nutmeg Horns, Popa Chubby, Adam Nussbaum (John Schofield), Sean Chambers (Blackfoot), (Sean Chambers Band), Debby Hastings (Bo Diddley), Margo Lewis (Bo Diddley), Sam Morrison (Miles Davis), Slam Allen (James Cotton), Vito Luizzi (Johnny Winter), Paul Nelson (Johnny Winter), Eric Sardinas, Lucky Peterson and Samantha Fish just to name a few…  In 2016 Delray won the IBC challenge again and will represent the 2nd Story Blues Alliance in Memphis in January of 2017. Although he loves to listen to and play “Traditional” style Blues Lee Delray is not just a recycler… He is an innovator who is not afraid to push the limits of the Blues. On August 2nd 2016 Lee will be releasing his second Cd entitled “Brand New Man”, which might very well be the most cutting edge Blues release in the past decade… Lee Delray will be the first to intertwine Blues and Hip Hop on the same record. Lee brought on Rapper Young Chizz and Deejay Nogood on the track “First String Man” to do some things on a Blues tune that have never been done before. Also in 2016 Delray had the honor of being asked to join the bill at B.B. Kings NYC for a sold out show with Grammy award winning guitarist Paul Nelson and BMA winner and Grammy nominated Contemporary Blues artist Joe Louis Walker. The show went so well that they did it again in Washington Square Park where Lee and Paul Nelson shared the stage and played a blistering set of high octane Blues to an adorning crowd that couldn’t keep their cellphones in their pockets. When you come to a Lee Delray show as a Blues fan you will be very at home. The way he mixes his influences from the three Kings is seemless. All the while making it completely his own. But the best thing about Lee Delray is that his music appeals to just about everyone.